I've got a bit of an admission to make.
Recently, I've been watching some foreign kids CGI movies.
And I've been liking them.
Sure, the effects aren't always decent and the plots can be rather cliche, but overall they can be kinda entertaining. It may help that my expectations are lower, but like with The Snow Queen, for example, they can be surprisingly decent.
So, when I saw advertising for a movie called Monster Family, I figured that I'd give it a go.
And, despite my low expectations, I was still disappointed.
Yeah, this movie has bad sitcom cliches out the wazoo. So let's drag our knuckles down and sink our fangs into it then.
Before we begin I should start with a Spoiler warning, due to the fact that this movie has only just been released in English.

The movie starts somewhere. Seriously, we are given absolutely no indication where the opening is set. It's just somewhere really cold with a fortress on top of a waterfall.
The scene moves inwards whilst the soundtrack plays the exact music you would think of if I said the name Dracula.
Inside the fortress we discover that the music is being played on an organ by three bats. These bats will serve as our comic relief throughout the movie and whilst they very clearly have distinct personalities I'm just going to refer to them as the Minions, because that's very clearly who they are.
Just as they're reaching the climax of the musical piece, Vlad Dracula himself enters and he's kinda merely okay. I mean, this version isn't a particularly bad design for him, but it also doesn't look particularly imposing either. But it's definitely above the concept of 'Meh'.
He then immediately ruins any gravitas he has by attempting (And failing at) a Tom Jones dance number.
And I have to talk about his voice. He's played by an actor named Jason Isaacs, an actor who is most easily recognised as Lucius Malfoy. But since I've never watched Harry Potter, I recognise him as Admiral Zhao.
In the Avatar cartoon he gave Zhao a ruff, grumbly kind of voice, but here he gives Dracula a softer tone. Again, it's not terrible, but it doesn't really lend itself to someone who's supposed to be imposing. He sounds like someone who would ask to speak to my manager, but would ask politely and would assure you that while he's complaining about something, it's not about you. But he would still look down on you.
The opening scene serves to show us that Dracula is incredibly lonely, but he also refuses comfort when it's offered him.
We then cut to somewhere in New York where our main protagonist is hurrying to work, bumping into people and being generally clumsy as she does so.
Let's see now.
Late for work? Check.
Incredibly clumsy? Check.
Miserable with her life until the magical events force her to see things from a new perspective? Check.
Put a slice of toast in her mouth and she'd be a typical anime girl.
Anyhoo, on her way to work she somehow dials the wrong number (Because the writer doesn't know how mobile phones work these days) and she gets through to Dracula.
Yes, Dracula has a mobile phone.
This raises so many questions.
Why is he confused about the noise? It's not a default ringtone, so he must have set it himself.
Why does he own a phone if he's so lonely?
Does he have internet connection? Is he on Facebook?
If he has a smartphone, then what plan does he use? Was the assistant confused when he signed the contract as Count Dracula? 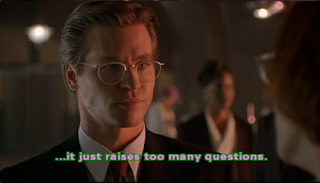 The CGI was of very high quality though.

Next time I'm going to try watching a cheap foreign knockoff of the Avengers. It can't be as bad as this, right?
Posted by MrGBH at 18:37