Reviewing this movie posed some degree of difficulty.
I have heard that many people dislike this movie. Personally I love it. I never get tired of watching Johnny Depp. However, he's often accused of stealing the show from the main character. I won't argue against that.
But wasn't that the point of the original novel?
There are many theories about what Lewis Carroll intended when he first wrote 'Alice's Adventures In Wonderland'. The most popular theory is that he was mocking the ridiculousness of Quantum Theory. Essentially the entire story was one long Schroedinger's cat metaphor.
But more importantly, when read with a critical eye, an under-running theme from the book is misery. Every character is miserable, despite how weird and fun their world may seem, actually living there is unbearable.
And Alice is just the viewpoint. In the book she never did anything proactive, she just reacted to the craziness around her.
I could analyse the book for multiple paragraphs, but that's not what I'm here for. I'm here to watch the movie.
So let's get started.

Obviously the movie opens in Victorian London, where Charels Kingsley is discussing trading prospects with his associates.
When his daughter walks in, complaining about her nightmare. Being a good father, Charles comforts his daughter by saying "You're mad. Absolutely bonkers. But I'll tell you a secret. All of the best people are."
Cut to thirteen years later and Charles has kicked the bucket. Thus we get to meet our main character, Alice.
In keeping true to the spirit of the book, Alice is slightly unusual by her time's standards. Her mother is fussing over her not being 'proper' but Alice is taking none of it. Full credit to her mother though, who stops fussing and drops the issue.
They arrive at the party and meet the hosts.
He's one of Charles' old business partners who's been supporting Alice's mother since his passing.
She is the bossiest nag you could ever hope to never meet.
She sends Alice to go dance with their son Hamish, who seems to fit every posh toff cliche the book has to offer.
Alice's mind wanders during the dance and Hamish barely listens to what she says. And when he does he just dismisses it all as idle fancy.
I don't think we're meant to like him.
He tells Alice to meet him under the gazebo in precisely ten minutes.
As a D&D player I fondly imagine that they need those ten minutes to slay it first.
Alice is accosted by two very odd girls who blurt out that Hamish is going to ask for her hand.
Alice's sister Mary shows up and scolds the girls, but she confirms that the entire party was so that Hamish could propose. Mary basically tells Alice that she doesn't have a choice but to say yes and live a perfectly happy life doing everything she's told.
As someone who's been in this exact same situation, I know what it's like to have people tell you what they think is best for you and then not listen when you point out that you'd be miserable.
Alice then gets dragged away by Hamish's mother (She gets dragged away a lot) who starts telling her that she'd better get started on manufacturing babies the moment she and Hamish are wed.
Just as we're learning about Hamish's digestion troubles Alice is distracted by a hare. She goes chasing after it and bumps into her Aunt Imogen. Imogen is waiting for her true love, a prince who can't marry her because he would have to renounce his throne to do so.
Alice then bumps into Mary's husband, who's sucking a young ladies face off.
But before Alice can decide whether to tell her sister or not she gets dragged away again, this time to the gazebo where Hamish is waiting to propose.
Alice panics and runs off, chasing after a white rabbit in a waistcoat, who runs down a rabbit hole. Alice leans in to try and see where it went, but the dirt gives and she falls in.
Alice lands at the bottom, somehow not injuring herself. Looking around she realises something's off.
After realising she's on the ceiling she crashes to the ground. You all know this next bit. She's in a small room with lots of doors, each of which is locked. There's a small table with a key on it, but the door it unlocks is tiny and she can't fit through. After finding a small bottle with 'Drink me' written on it she takes a sip and shrinks out of her clothes.
Unfortunately the door seems to have locked itself after her and she can't reach the key. But she finds the cake with 'eat me' written on it, which makes her grow.
She manages to get the door open and be the right size to fit through. And as such, Alice finally enters Wonderland.
As far as design and director go, this was a match made in heaven. Burton's signature love of swirls goes perfectly with the world described in Carroll's book.
After a little wandering, Alice bumps into the first part of her supporting cast.
They argue for a bit over whether Alice is really Alice or not. Eventually they decide to consult Absolum, who they say will know for sure.
Absolum instructs them all to unroll the Orraculum, which tells of each and every day since the beginning.  They turn to the Frabjous day, which doesn't come from 'Alice's Adventures In Wonderland', but actually from 'Jabberwocky', a poem also by Lewis Carroll.
This movie is more of a composite of Carroll's various works and does in fact cut out a lot from the original book. Considering the nonsencial nature of the book, I think this works in the movies favour.
Anywhoo, the Frabjous day is the day Alice slays the Jabberwocky.
Alice says that it can't be her, since she couldn't slay anything. The others ask Absolum if she really is Alice, to which he replies "Not hardly".
For a guy who's supposed to be absolute he sure is vague.
I think he's trying to be Yoda, but it comes off more as Boris.
Then everyone gets attacked by a whole bunch of soldiers and a giant dog-like thing called the Bandersnatch.
The soldiers begin snatching everyone up. Alice finds herself cornered by the Bandersnatch (Which sounds rather dirty to my mind) but she's not scared since it's just a dream.
Mallyumpkin (The mouse) comes to the rescue by stealing the Bandersnatch's eye.
Roaring in pain, the Bandersnatch accidentally claws Alice, who runs off.
After being joined by the Tweedles she comes across a fork in the road. 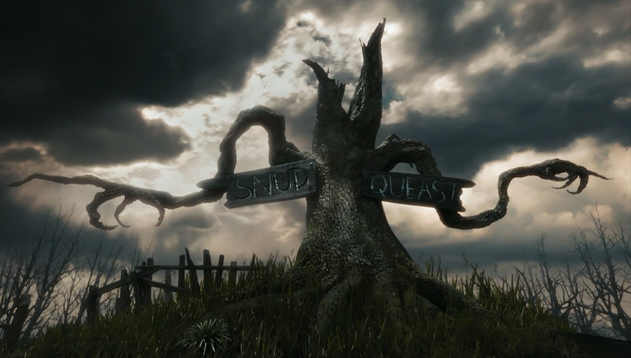 The Tweedles bicker in their usual unhelpful manner before being kidnapped by the Jubjub bird. Alice just looks on helplessly as they fly away to the Red Queen's castle.
And inside we're introduced to the Red Queen, our primary antagonist for this movie. She's loud, she's bloodthirsty and she's petty.
She's just like Queenie from Blackadder.
The Queen's angry about her tarts being stolen and when she finds the perpetrator (Who's a frog) she orders him executed. Not only that, but she also orders that his children be rounded up and served to her on toast.
Interestingly, this is no more violent and sadistic than in the book. But in the book it was implied that the King overruled all of her executions.
The King is absent from this movie.
I mentioned earlier about the underlying theme of misery that the book had.
Yeah, this movie brings it to the fore.
So the Knave of Hearts (named Elosevitch Stane) enters having stolen the Orraculum
He warns her that it predicts the death of the Jabberwocky at the hands of Alice but that it can be prevented. The Queen orders him to find Alice.
He blackmails a talking dog into tracking her down.
We meet up with Alice again as she wanders through some very dark and creepy woods. Checking her wound she is accosted by the Cheshire cat. He expresses concern over her wound and offers to disinfect it with his tongue, but Alice refuses.
To be honest I can see why Alice wouldn't trust him. We know he's a good guy, but he does still manage to come off as creepy.
She tries to get some answers out of him but he's naturally unhelpful, saying that he never gets involved in politics.
After some pressing he agrees to take Alice to the Hare and the Hatter.
And now it's time for the real star of the show.
I'm not sure what to say about this scene. Sure, Johnny Depp steals the show as the Hatter, but then again, so did the original Hatter in the book. Johnny also enriches the character by expanding it slightly. He makes the Hatter Scottish, which works really well when he recites the Jabberwocky poem later on. I also did research into Hatter's madness. Back in Victorian times Hatter's used Mercury vapours as part of their glues, which slowly drove them mad, but in a very specific way.
They became irritable and hallucinated often. In extreme cases they became violent. They also became very isolationist, refusing to work if others were watching.
And their fingers became red and blotchy.
When it comes to madness, Johnny really knows his stuff.
Anyway, they get into an argument about how Cheshire didn't help when the Red Queen took over Underland.
Mally manages to calm him down and they talk about Futterwacking, a type of dance that the Hatter used to do most vigorously.
Then the Knave shows up. Hatter manages to give Alice some more shrinking potion and hides her inside the teapot. The Knave insults the trio and asks if they've seen Alice.
The dog sniffs around and almost gives the game away, but Hatter gives him a look and he runs off, pretending to have picked up a scent.
The Knave leaves and Hatter makes a new outfit for Alice that fits her new size.
Hare suggests taking her to the White Queen where she'll be safe, so she climbs aboard the hat and they set off.
As he walks the Hatter recites the Jabberwocky poem. In a Scottish accent.
It is pure audio perfection.
Although he does skim a bit.

’Twas brillig, and the slithy toves
Did gyre and gimble in the wabe:
All mimsy were the borogoves,
And the mome raths outgrabe.

“The Jabberwock, with eyes aflame!
Jaws that bite and claws that catch!
Beware the Jabberwock my son!
And the frumious Bandersnatch!”

He took his vorpal sword in hand;
The vorpal blade went snicker-snack!
He left it dead, and with its head
He went galumphing back.'

Anywhoo, next week I'll be reviewing a movie that I've never actually watched. I've no idea how it came into my possession, but it somehow did.
It's called Bangkok Ninjas.
Should be fun.
Posted by MrGBH at 23:02