Question: How many people consider themselves to be a gentleman?
And what does it mean to actually be one? What ideals should you follow and how should you conduct yourself?
The answers seem pretty obvious. I like to think of myself as a gentleman and I try to hold myself to a high standard of conduct.
But this movie really shows it it means to be a gentleman.
It's the 1958 classic, The Big Country. 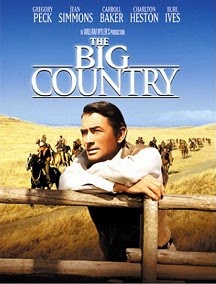 Westerns are a staple of American culture. They're so ingrained that everyone knows that when someone's referred to as a 'Cowboy cop' it means they solve their problems with violence. While they uphold the law they do it mostly by disregarding it. Westerns have encouraged this attitude.

Next week it's time for something less heavy, but with just as good a moral.
And it's about Christmas of all things.
Posted by MrGBH at 01:03